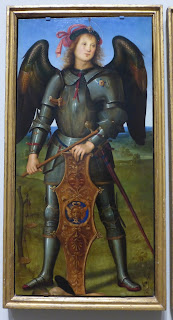 We celebrate the feast of the Archangels. Scripture names three Archangels: Michael, Gabriel and Rafael. These archangels have their own role. Michael shows the power of God because he leads the heavenly armies. Gabriel shows God is the good news and Rafael shows God’s healing. The Second Reading narrates how Michael and his angels defeated Satan and his angels who were thrown down to the earth. After this, the reign of God is proclaimed.
Angels are real even if we do not see them. They are spirits who were created to serve God. Unlike human beings, they do not have bodies. They are more powerful than we are, they are more intelligent than we are. But they are not Almighty, nor are they all knowing, because they are still creatures of God. We celebrate the three Archangels to remember that God is almighty, that he is the good news and that he heals.
We also must remember the free will God has given us. Satan was called Lucifer, the angel of light and he was an angel of God. Yet despite his privileged position, he rebelled against God. Satan wanted to overthrow God from his throne. This act of Satan shows how free will works, that even if Satan could see God face to face, he still choose to do evil. Which is why he was thrown out of heaven by Michael. 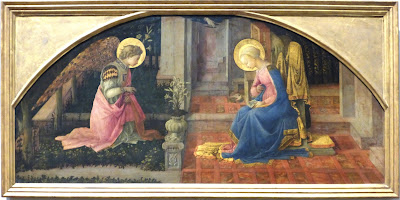 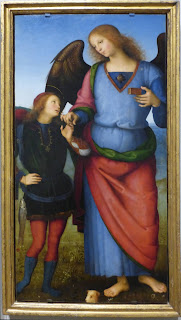 Rafael accompanied Tobias on his journey and healed the future wife of Tobias, Sarah, of her curse. Rafael also healed Tobit of his blindness. His presence reminds us of God’s healing power. In the case of Sarah, Rafael drove off the demon who tormented her.
These archangels reveal some attributes of God because they obey God. God created them to help us. St Paul wrote Our battle is not against flesh and blood but against principalities and power, against the rulers of the world of this darkness, against the spirits of wickedness in the high places. Which is why he calls us to put on the armor of God. And as we battle these spirits, we also call on the angels to help us in our battle. We call on St Michael to help us in this battle against evil spirits. We call on Gabriel to remind us of the Good News: Jesus Christ. We ask Rafael to heal us and help us develop virtues to strengthen us in our movement toward holiness.
Lord, send your might angels to protect me, to lead me to you and help me grow in holiness. St Michael, defend us in battle. Be our defense against the wickedness and snares of the devil. May God rebuke him we humbly pray. Do thou, O prince of the heavenly hosts, by the power of God, cast unto hell Satan and all his demons who roam around the world, seeking the ruin of souls. Amen. St Gabriel, show me Jesus. St Rafael, heal me from my sinfulness.
Posted by Philip L Yuson at 9:23 PM

Please feel free to post comments. However, be aware that comments are moderated and may be removed at the author's discretion.